Cypress, California is located on the border between Orange County and Los Angeles County. The city is home to great community amenities and beautiful homes. Cypress is located slightly inland, but is still just under 8 miles from the closest beach (Seal Beach). The city is a great neighborhood for families with the great school district, ideal weather, reasonable home prices, and access to highly-desired jobs.

Places to see in Cypress

Oak Knoll Park – Set right in the middle of the city, Oak Knoll Park is a popular spot for residents who want to get outside. The park spans 22-acres of green space, consisting of a sand volleyball court, multiple baseball fields, a playground for the kids, and great walking trails.

Los Alamitos Race Track – The first race at what is now Los Alamitos was held 70 years ago in 1947. Through the years, the track has hosted dozens of notable races featuring thoroughbreds and quarter horses. The track hosts four stakes races for purses over $1 million dollars, the most of any track in the country.

Cypress Real Estate Market: The median home value in Cypress is approximately $624,400 (as of January 2017), with a price per square foot of approximately $371. This is slightly lower than the average price per square foot of $389 for the rest of the Long Angeles-Long Beach-Anaheim Metro area. The current housing market in Cypress is cool with a reasonable rise in home values in the past year. Since early 2016, home values have risen 5.3%. Movement is expected to slow a little in the next year with a projected rise of 2.4% before January of 2018.

Cypress Rental Market: The average rent in Cypress of $2,789 is slightly lower than the average rent of $2,900 for the rest of the Los Angeles-Long Beach-Anaheim Metro area. 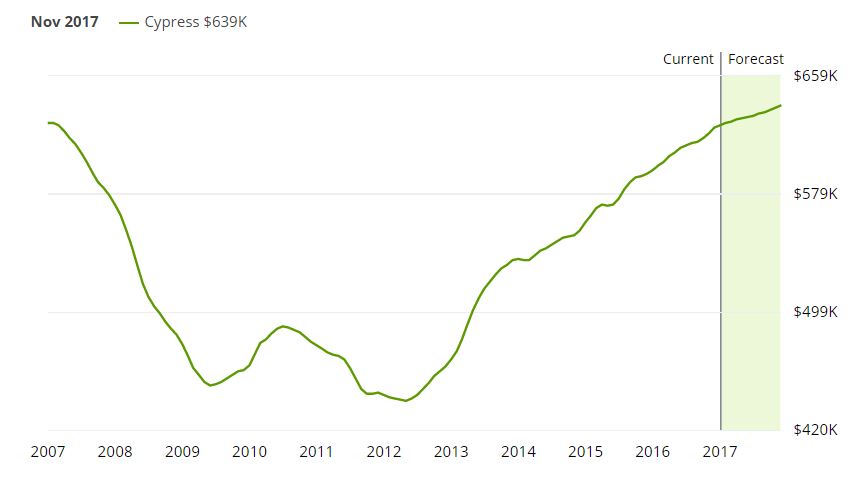 Crime: The overall crime rate in Cypress is 65% lower than the national average, and safer than approximately 82% of the cities in California. Safety has become a matter of discussion in the the city as the number of crimes has increased by 17% from the previous year.