Orange County and ideal surf conditions go hand-in-hand, and perhaps nowhere is this more evident than Dana Point. The city is centrally located, an hour from Los Angeles and an hour from San Diego, ensuring that Southern California’s hotspots are never more than a quick drive away. The community is home to one of the busiest harbors in the county with an outstanding marina and access to various sea-life through the ocean institute, tide pools, whale watching tours and more. The beautiful city is truly one of Southern California’s best places to visit and an even better place to live.

Places to see in Dana Point

Salt Creek Beach Park – The picturesque beach in Dana Point is often considered one of the finest beaches in California. The beach and surrounding area is home to basketball courts, volleyball courts, a large grassy area, and ideal surfing conditions.

Dana Point Lantern District – The historic center of Dana Point resides in the Lantern District. The area recently underwent a major revitalization project to restore its previous luster. The lantern lined streets are perfect for a neighborhood stroll to enjoy the beautiful houses, businesses, and restaurants.

Dana Point Harbor – The harbor is the center of the action in Dana Point, complete with an ocean institute, whale watching, fishing, shopping, kayaking, and dozens of restaurants with a view of the water. A redevelopment is in the works to update the area that has been in operation since the 1960’s.

Capistrano Beach – Capistrano Beach is the southern-most beach in Dana Point, bordering San Clemente and Doheny. The beach is known for its wide range of residents, from celebrities in some of the finest homes in the County to modest beach cottages on the water. The renowned surfing in the city is well represented by Capistrano Beach.

Dana Point Real Estate Market: The median home value in Dana Point is approximately $854,000 (as of October 2016), while price per square foot is approximately $539. This is significantly higher than the average price per square foot of $389 for the rest of the Long Angeles-Long Beach-Anaheim Metro area. The current housing market in the city is cold with a reasonable rise the past year. Since 2015, home values have risen 4.5%. Movement is expected to plateau in the next year with a forecasted rise of just 0.9% before October of 2017. 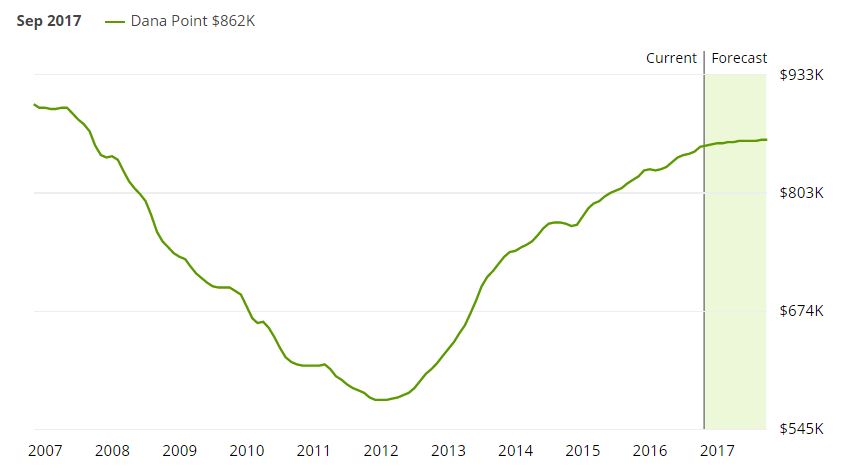 Crime: The overall crime rate in Dana Point is 34% lower than the national average, and safer than approximately 59% of the cities in California. Safety has become a matter of discussion in the city as the number of crimes has increased by 21% from the previous year.