An unbelievable beach community located 12 miles north of downtown San Diego, La Jolla is truly one of the finest cities in America. Accurately named ‘the Jewel’, this 7 mile stretch along the Pacific Ocean contains some of the area’s most beautiful beaches. The affluent community boasts some of the highest median home prices in the nation but rightfully so, with unbelievable views and all the amenities you could ever need to live a life of luxury just a short walk away.

La Jolla has been a tourist destination since its origins as a resort city in the 1890s and still brings in a significant number of visitors each year. The main attractions in the city include the many shops, restaurants, and bars of the La Jolla Village; the unbeatable Windansea beach; and the highly regarded University of California, San Diego. The central location of the city makes it an extremely desirable destination for anyone looking to take in all that beautiful San Diego has to offer.

Things to do in La Jolla

Torrey Pines Golf Course: One of the premier courses in the nation, Torrey Pines is home to breathtaking ocean views and the annual PGA tournament, the Farmers Open. Take advantage of the resident discount and play an unforgettable eighteen holes anytime.

La Jolla Cove: The cove is a popular weekend destination for locals and tourists alike. Swim, snorkel, or scuba dive in crystal clear waters or wait for low tide to check out amazing marine life in the many tide pools.

Mount Soledad: If you love the great outdoors, take a hike to the top of Mount Soledad to enjoy unbelievable panoramic views of the entire city. The hill is also home to a large memorial cross honoring our nation’s veterans.

Birch Aquarium: A perfect place to take a day trip for families with kids, ocean lovers, and anyone in between. The Birch Aquarium at the University of California, San Diego is open year round and features over 3000 marine animals.

La Jolla Real Estate Market: The median home value in La Jolla is $1,667,100, which is more than twice the national average. Home prices in the city have risen 4.3% since last year and are set to rise even higher before 2017. 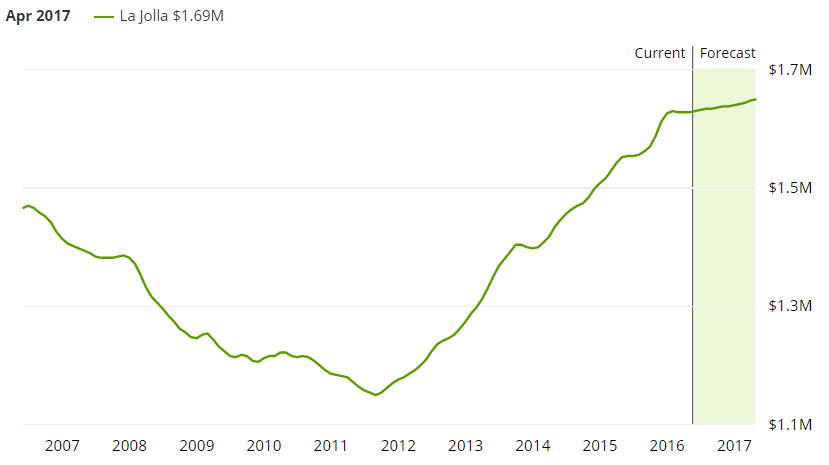 Population: Roughly 42,800 as of the last available census 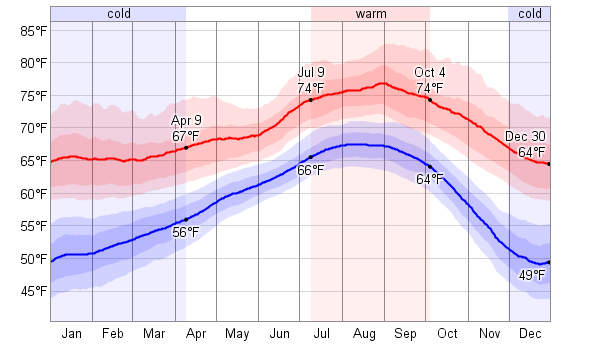 Crime: The overall crime rate in La Jolla is 68% lower than the national average. In addition, the number of crimes in the San Diego area decreased by 15% from the previous year.

Median Family Income: The median family income in La Jolla is $136,670 which is more than double the national average.