La Palma is a small town of just over 15,000 people located on the border of Los Angeles County and Orange County. The beautiful city is ideally located, sitting just a quick trip away from the attractions in Anaheim and Buena Park. La Palma was recently ranked as the 16thbest place to live in the United States, based off of the “small-and-friendly neighborhood vibe, high-ranking schools, low-crime rate, and, additionally, the quickest police response time in Orange County.”

Places to see in La Palma

Central Park – The best place in La Palma to get outside and enjoy the unbeatable Southern California weather is without a doubt Central Park. The flagship park of the city may be small, but it is home to baseball fields, basketball courts, a big grassy area, picnic tables, a playground, and much more.

Knott’s Berry Farm – Although technically located in Buena Park, Knott’s Berry Farm is a favorite spot for La Palma residents of all ages. The park slogan of “America’s 1st Theme Park” can be traced back to its roots while it existed as a roadside berry stand and friend chicken diner. Knott’s first began hosting customers in 1940 and built the first rides in 1955. Today, Knott’s is the twelfth most visited theme park in North America, home to 40 rides and a number of events year round, including the very popular Knott’s Scary Farm during October.

La Palma Real Estate Market: The median home value in La Palma is approximately $706,000 (as of January 2017). This is moderately higher than the average home value for the rest of the Long Angeles-Long Beach-Anaheim Metro area. The current housing market in La Palma is reasonably strong with a 4.2% rise in home values in the past year. Movement is expected to slow in the next year with a projected rise of 1.5% before January of 2018

La Palma Rental Market: The average rent in La Palma of $2,934 is marginally higher than the average rent of $2,900 for the rest of the Los Angeles-Long Beach-Anaheim Metro area. 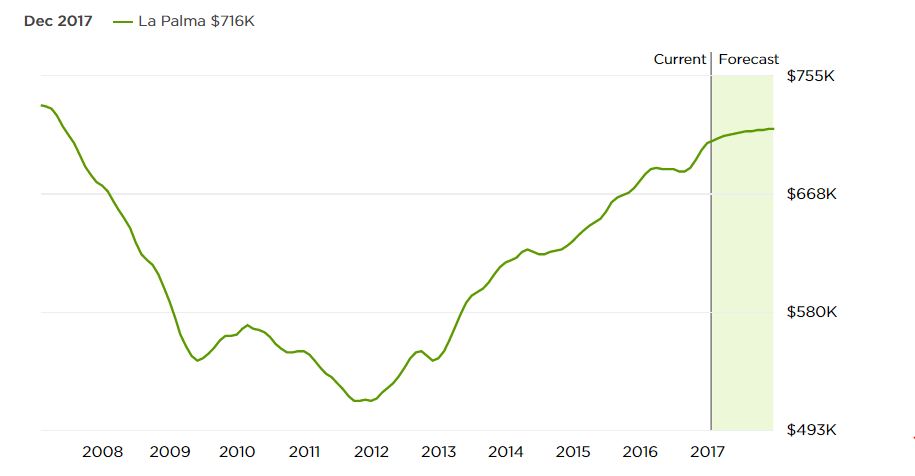 Climate: La Palma is located inland in northern Orange County, featuring a semi-arid climate. The inland location causes greater variation in temperatures than in nearby coastal cities. Consequently, temperatures in the city rarely climb above 85 and below 45 degrees throughout the year.

Crime: The overall crime rate in La Palma is 67% lower than the national average, making it safer than approximately 84% of the cities in California. Safety has become a matter of discussion in the city as the number of crimes has increased by 22% from the previous year.