Laguna Hills is a quaint neighborhood sitting east of Laguna Beach near the Laguna Canyon. The city of just over 30,000 people was incorporated just 25 years ago, and takes up only 6.4 square miles in southern Orange County. Laguna Hills is made up of mostly residential neighborhoods, but is also home to over 500 businesses. The young city contributes significantly to the history of the area, as it was once home to Native American settlements, Spanish government authorities, and a massive fossil reserve. This small town in the beautiful Southern California sunshine is truly one an ideal place to call home.

Places to see in Laguna Hills

Top of the World – This scenic lookout point is located in Alta Laguna Park near the trail head for the Aliso and Wood Canyon Wilderness Park. The spot offers panoramic views of Laguna Beach and the beautiful Pacific Ocean.

Costeau Park – This spacious park in Laguna Hills was the recipient of a renovation in 2011. The park features plenty of exciting options for kids and teenagers with climbing structures, basketball courts, and plenty of grassy area.

Fossil Reef Park – Laguna Hills is home to Fossil Reef Park, a preserved, 17 million year old limestone shelf. This historic site is a popular place for local residents to bring their children on weekends, where they can play on the dinosaur themed playground and dig for fossils.

Laguna Hills Real Estate Market: The median home value in Laguna Hills is approximately $701,400 (as of November 2016) while price per square foot is approximately $361. This is slightly lower than the average price per square foot of $389 for the rest of the Long Angeles-Long Beach-Anaheim Metro area. Additionally, the current housing market in Laguna Hills is cold with a reasonable rise the past year. Since 2015, home values have risen 2.5%. Movement is expected to plateau in the next year with a forecasted rise of just 0.3% before November of 2017. 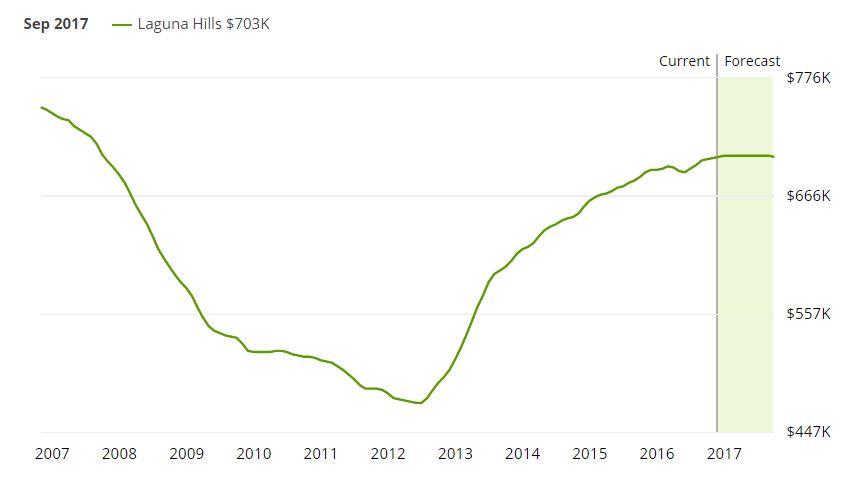 Climate: Laguna Hills is located inland in southern Orange County and typically has a semi-arid climate with very little change in temperature throughout the year. Temperatures rarely climb above 80 or below 45 degrees throughout the year. The warmest month on average is August (high 80, low 60) and the coldest month on average is December (High 67, low 43).

Crime: The overall crime rate in Laguna Hills is 63% lower than the national average, and safer than approximately 80% of the cities in California. Safety has become a matter of discussion in the Laguna Hills area as the number of crimes has increased by 16% from the previous year.