Contrary to the typical image of standstill Los Angeles freeways and high-density residential areas, Laguna Niguel is widely-recognized by locals for its extensive parks and hiking trails. Orange County is home to the massive, 22,000 acre South Coast Wilderness, much of which is located in Laguna Niguel and the surrounding San Joaquin Hills. The city contains 80-miles of hiking trails, most of which possess unbelievable views of Laguna Niguel’s unique landscape to the east and Orange County’s beautiful coastline to the west. Laguna Niguel is about more than just the beautiful scenery. Highly regarded schools, unbeatable weather, and reasonable home prices make this great city an ideal place to live.

Places to see in Laguna Niguel

Aliso & Wood Canyons Wilderness Park – Making up 4,500 acres of the South Coast Wilderness is the Aliso & Wood Canyons Park. The park receives tens of thousands of visitors each year who can take in the beautiful Southern California weather while exploring the caves and springs or while hiking, biking, and riding horses on the numerous trails.

Skateboard and Soccer Park – Yet another park to add to the impressive list is one of OC’s largest skate parks. The park features over 20,000 square feet of concrete and contains areas for bikers and skateboarders of all ages and skill levels. Group and private lessons are available, as well as birthday party packages. The park also is home to a turf soccer field which hosts leagues and pick up games throughout the year.

Laguna Niguel Real Estate Market: The median home value in Laguna Niguel is approximately $777,700 (as of November 2016), with a price per square foot of approximately $411. This is reasonably higher than the average price per square foot of $389 for the rest of the Long Angeles-Long Beach-Anaheim Metro area. The current housing market in Laguna Niguel is cold after experiencing very little rise the past year. Since 2015, home values have risen just 2.0% and movement is expected to plateau even more in the next year with a forecasted rise of just 0.1% before October of 2017. 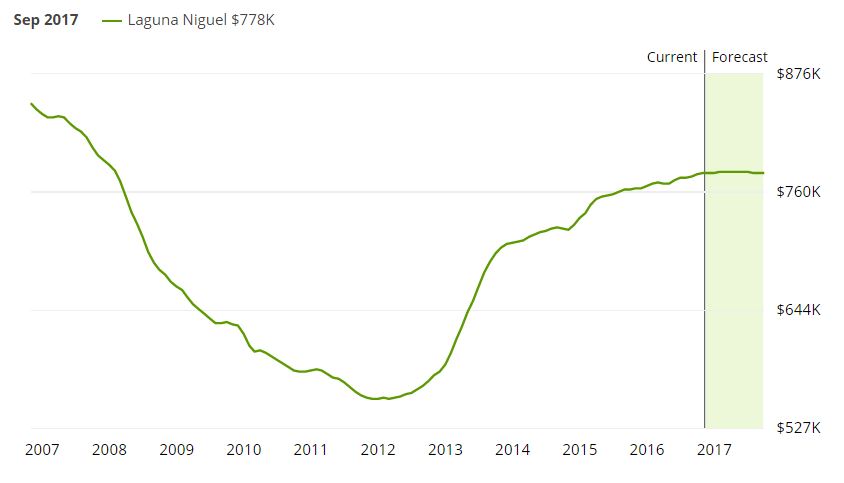 Crime: The overall crime rate in Laguna Niguel is 61% lower than the national average, and safer than approximately 94% of the cities in California. Although the neighborhood is one of the safest in the state, safety has become a matter of discussion in the city as the number of crimes has increased by 16% from the previous year.