Los Alamitos is a small town of under 12,000 people, located on the border between Orange County and Los Angeles County. The quiet community has a rich history in Southern California, including playing a huge role in aircraft manufacturing before and during World War II. Following the war, many military personnel decided to keep their families in Los Alamitos. The city began building a number of suburban ranch communities to meet the high housing demand, in return pushing manufacturing centers out of Los Alamitos. Today, the city is home to beautiful weather, affordable housing, and highly-regarded schools.

Places to see in Los Alamitos

Seal Beach Winery – The Seal Beach Winery features wine from the famous Estelle Vineyard. The proximity to the Pacific Ocean creates unique wines that capture the essence of Southern California. The winery hosts wine tastings and tours throughout the year.

Los Alamitos Race Track – Although technically located in Cypress, the race track plays a vital role in the history of the community. The track opened 70 years ago in 1947, and has since hosted dozens of notable races and events. The track hosts four stakes races for purses over $1 million dollars, the most of any track in the country.

Los Alamitos Real Estate Market: The median home value in Los Alamitos is approximately $881,400 (as of January 2017), with a price per square foot of approximately $464. This is moderately higher than the average price per square foot of $390 for the rest of the Long Angeles-Long Beach-Anaheim Metro area. The current housing market in the city is strong with a slight increase in home values in the past year. Since early 2016, home values have risen 2.5%. Value growth is expected to continue in the next year with a projected rise of 1.5% before January of 2018. 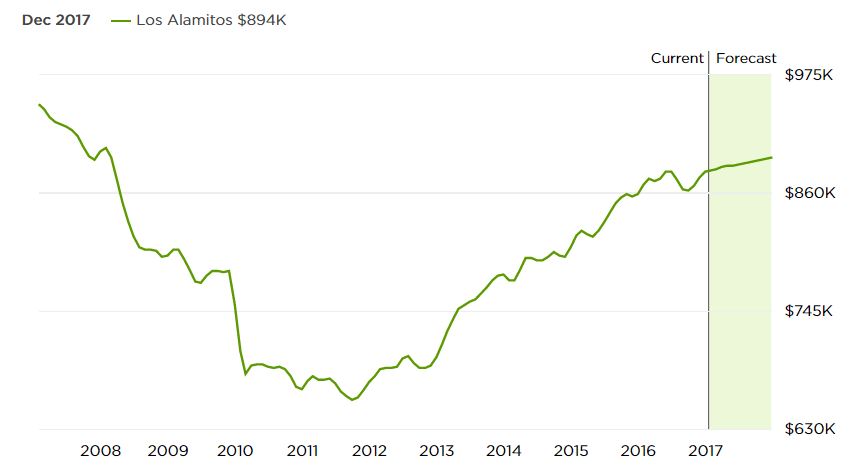 Climate: Los Alamitos is located inland in northern Orange County and features a semi-arid climate. The inland location causes greater weather variation than nearby coastal cities, but still maintains typical, moderate Southern California temperatures throughout the year. In addition, temperatures rarely climb above 85 or below 45 degrees.

Crime: The overall crime rate in Los Alamitos is 59% lower than the national average, as the city is safer than approximately 74% of the cities in California. Safety in the city has become an matter of discussion in recent years, with overall crime increasing by 9% in 2016 alone.