Similar to many of the surrounding communities, Mission Viejo is in it’s infancy as a major city in Orange County. The up-and-coming, picturesque neighborhood is one of the largest master-planned commuities in the country, consisting mainly of uniformly designed developments. Consequently, the city is known for it’s beautiful parks, tree-lined streets, and upscale amenities. The inland location differentiates the city from it’s coastal neighbors, while still maintaining many the luxurious aspects that Orange County has to offer.

Places to see in Mission Viejo

Lake Mission Viejo – This large, artificial reservoir finds itself directly at the center of the city. The lake is a popular recreation spot offering boat rentals, swimming and water sports at the man-made beaches, and fishing for a variety of annually stocked species. Events take place at the lake year round including fitness classes, youth camps, and holiday parties.

Mission Viejo Real Estate Market: The median home value in Mission Viejo is approximately $669,400 (as of November 2016), while price per square foot is approximately $370. This is slightly lower than the average price per square foot of $389 for the rest of the Long Angeles-Long Beach-Anaheim Metro area. In addition, the current housing market in the city is neutral with a moderate rise of 3.4% in the past year. Movement is expected to plateau in the next year with a projected rise of just 0.5% before November of 2017. 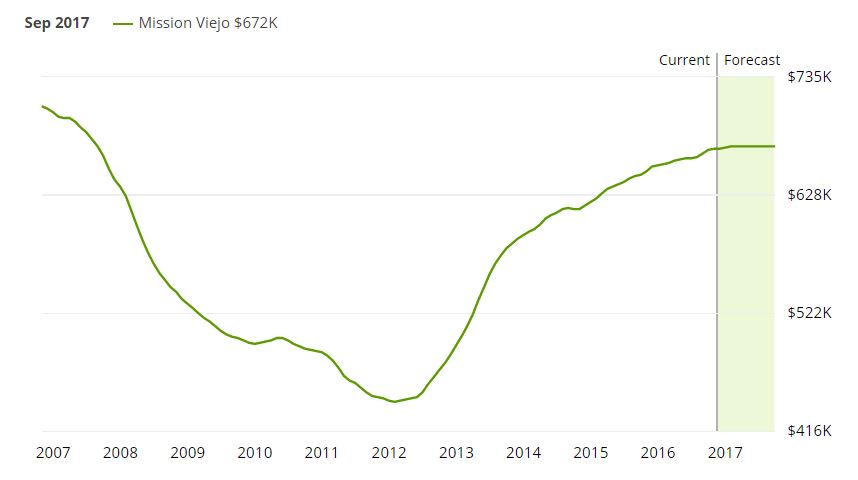 Climate: Mission Viejo is located inland in southern Orange County so it has a semi-arid/Mediterranean climate. The city receives sunshine year-round while it only sees rain between November and March. Consequently, temperatures rarely climb above 90 and below 50 degrees throughout the year with the warmest month in August and the coldest in December.

Crime: The overall crime rate in Mission Viejo is 78% lower than the national average, and safer than approximately 91% of the cities in California. Safety has become a matter of discussion in the city, however, as the number of crimes has increased by 24% from the previous year.