A sprawling beachside community that stretches miles inland, Oceanside is located on the northwestern border of San Diego County. The area was originally inhabited by Native Americans, and was eventually settled by Spanish missionaries when Father Junipero Serra founded Mission San Luis Rey de Francia a few miles inland from the ocean. Today, the city is home to many military personnel (given its close proximity to Marin Corps Base Camp Pendleton) and residents looking for a more rural lifestyle.

Homes in Oceanside range from beachfront cottages to 1-story ranches, with plenty of new construction to fuel this growing city. For commuters, the city is roughly 45 minutes away from downtown San Diego, but the Coaster (which picks riders up in downtown) is a great alternative for sitting in traffic.

Things to do in Oceanside

Oceanside Pier/Downtown: Not only does Oceanside boast one of the most family-friendly beaches in San Diego, it also has one of the largest downtown areas, with plenty of restaurants, bars, the California Surf Museum, farmer’s markets, and more.

Guajome County Park: If the beach gets too crowded, you can head inland on Highway 76 to one of North County’s finest parks, featuring 4.5 miles of park trails and 33-site campground.

Oceanside Real Estate Market: Oceanside has a median home value of $446,700. This places it below the overall San Diego County average, and below some of its more prestigious neighbors like Carlsbad. Though it has a lower average home price, it still is a hot market with rising prices. 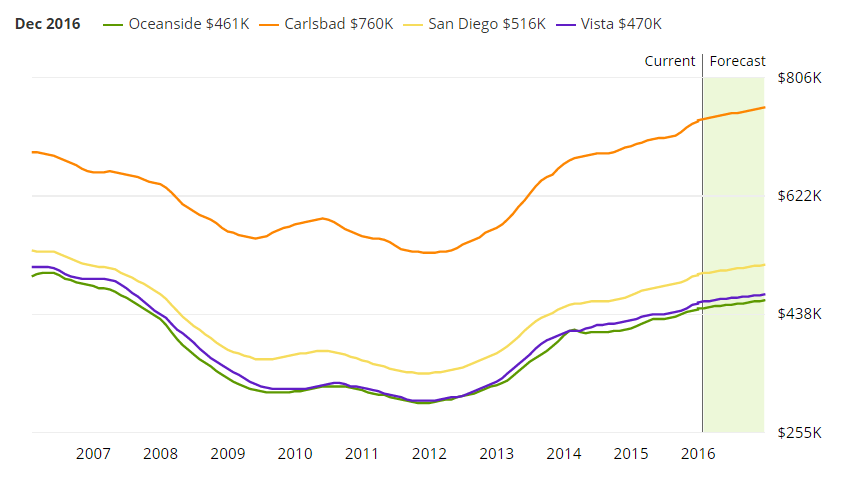 Size: The total area of Oceanside is 42.174 square miles. This, consequently, makes it one of the largest cities in San Diego County by area.

Climate: Oceanside has a semi-arid climate. In addition, the average highs are between 65 and 82 degrees and lows are between 41 and 62 degrees. Due to its proximity to the ocean, you can expect a refreshing breeze on most days, though temperatures due increase the further inland you go. 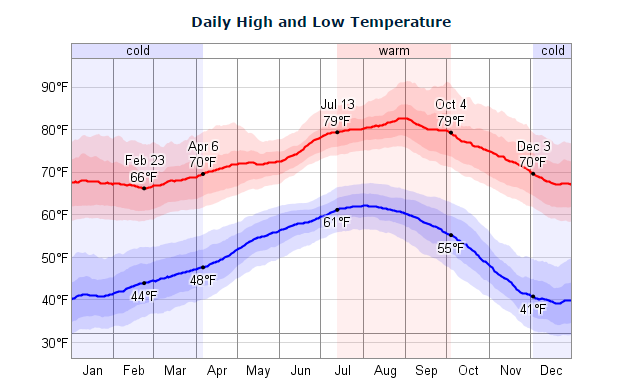 Crime: Oceanside has an Average crime rate according to City-Data.com. In addition, the crime rate has been falling steadily for the past 10 years.

Median Family Income: The median family income for the city is $52,232. Consequently, this is under the average for San Diego County ($62,962). However, it is on par with the overall average U.S. median household income of $53,657.