Located midway between San Diego and Los Angeles, San Clemente is a coastal gem in southern Orange County. The city is well known for its beautiful beaches, unbelievable surfing, and breathtaking ocean views from the hillside above the city. The Spanish architecture that can be found throughout the community is the envy of surrounding cities, while lending itself to the slogan, “The Spanish Village by the Sea.” San Clemente is home to highly regarded schools, prestigious jobs at a number of local corporate headquarters, and unbeatable weather year round.

Places to see in San Clemente

Casa Romantica Cultural Center and Gardens – Home to beautiful views both inside and out of the complex, Casa Romantica is a historic landmark in the city. The cultural center provides critically acclaimed events and programs for people of all ages in history, horticulture, arts, music, and literature.

San Clemente Farmers Market – For over 20 years, San Clemente has been home to one of the most picturesque farmers markets in the country. Located on Avenida del Mar on Sunday mornings, the market features a wide range of local fruits, vegetables, flowers, breads, and much more.

San Clemente Real Estate Market: The median home value in San Clemente is approximately $843,400 (as of Decemeber 2016) while price per square foot is approximately $416. This is reasonably higher than the average price per square foot of $389 for the rest of the Long Angeles-Long Beach-Anaheim Metro area. The current housing market in the city is cold with a slow rise in home values in the past year. Since 2015, home values have risen just 1.4%. Movement is expected to plateau in the next year with a forecasted rise of just 1.8% before December of 2017. 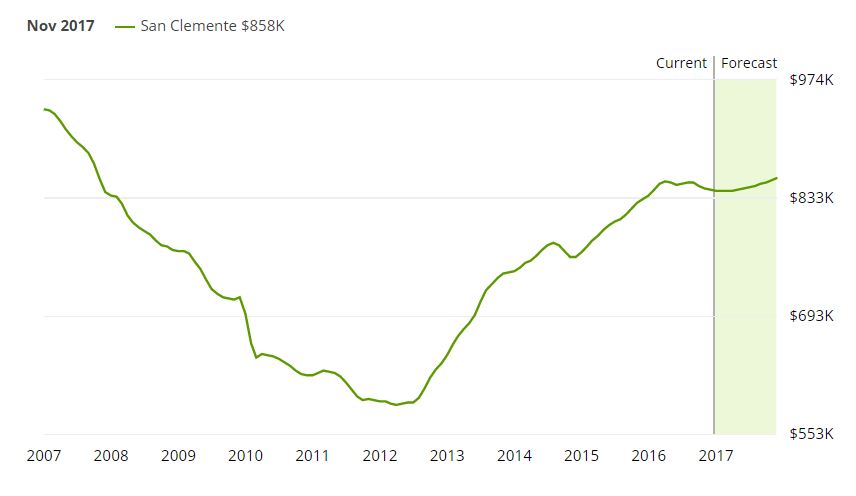 Crime: The overall crime rate in San Clemente is 72% lower than the national average, and safer than approximately 87% of the cities in California. Safety has become a matter of discussion in the city, however, as the number of crimes has increased by 12% from the previous year.