Seal Beach, formerly known as “Anaheim Landing”, is a small town located just south of Long Beach in the northwest corner of Orange County. The city is home to a naval base and an impressive stretch of beach, including the second longest pier in California. Seal Beach was previously known as a extremely popular tourist destination with a waterfront amusement park and regularly packed beaches and a throughout the summer months. While much of this traffic has migrated south to Newport and Huntington, the city still attracts a number of surfers and neighboring residents. The great weather, friendly people, and small-town charm make Seal Beach a great place to live.

Places to see in Seal Beach

Seal Beach Pier – The second longest wooden pier in California can be found in Seal Beach. The pier was recently destroyed by a fire but quickly rebuilt. It remains an ideal spot to fish, watch surfers, or check out unbelievable views othe city and the sparkling ocean.

Eisenhower Park – Located at the beginning of the pier, Eisenhower Park is a great place to bring your kids to take in the sights and sounds of the city. the park features a playground, picnic areas, and beach volleyball courts.

Seal Beach Real Estate Market: The median home value in Seal Beach is approximately $886,600 (as of December 2016) while price per square foot is approximately $269. This is significantly lower than the average price per square foot of $389 for the rest of the Long Angeles-Long Beach-Anaheim Metro area. The current housing market in the city has cooled off significantly after a massive rise in home values in 2016. Since 2015, home values have risen 11.9% but are expected to grow just 1.9% before December of 2017.

Seal Beach Rental Market: The average rent in Seal Beach is $3,255. This is significantly higher than the average rent of $2,675 for the rest of the Los Angeles-Long Beach-Anaheim Metro area. 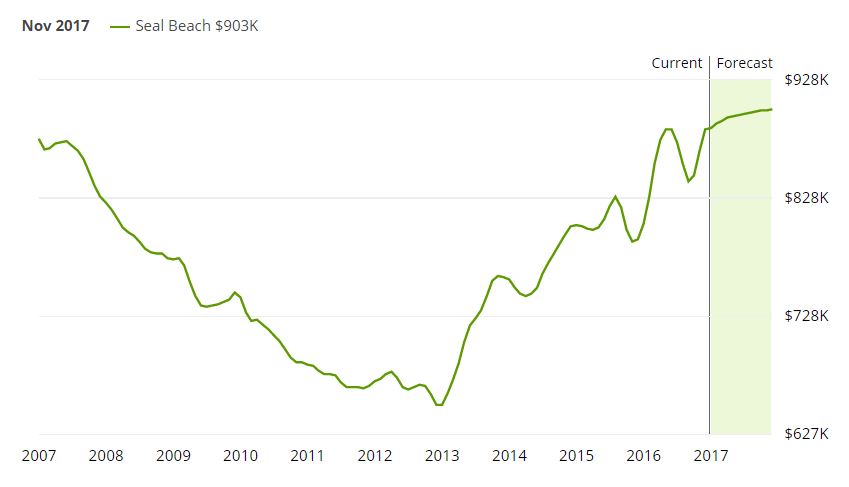 Crime: The overall crime rate in Seal Beach is 59% lower than the national average, and safer than approximately 74% of the cities in California. Safety has become a matter of discussion in the city, however, as the number of crimes has increased by 18% from the previous year.