Sitting just to the southeast of Downtown Los Angeles, beautiful Yorba Linda is one of the great Southern California cities. The suburban neighborhood began as an agricultural community, with lemon and orange groves covering the area. Since then it has grown and found itself among the finest cities in the country. In 2005, Yorba Linda was ranked 21st in CNN’s best places to live. Becoming apart of this amazing community is not easy, as the median household income of over $121,000 ranks among the highest in the nation.

Places to see in Yorba Linda

Richard Nixon Library and Birthplace – Dedicated in 1990, the Richard Nixon Library is the resting place of the 37th President of the United State. The location also houses a 52,000 square foot museum and the home where Nixon was born, originally built by his father in 1910.

Black Gold Golf Club – A beautiful course sitting in the northern pat of the city, Black Gold Golf Club is an unreal 18-holes overlooking Los Angeles and Orange County. The course is also home to special events and numerous weddings throughout the year.

Yorba Linda Real Estate Market: The median home value in Yorba Linda is approximately $802,000 (as of January 2017) while price per square foot is approximately $371. This is slightly lower than the average price per square foot of $390 for the rest of the Long Angeles-Long Beach-Anaheim Metro area. The current housing market in Yorba Linda is very cold with low inventory affecting sales. Home values in the city have experienced a reasonable rise of 4.1% since early 2016, but movement is expected to slow in the next year with a projected rise of just 1.7% before January of 2018. 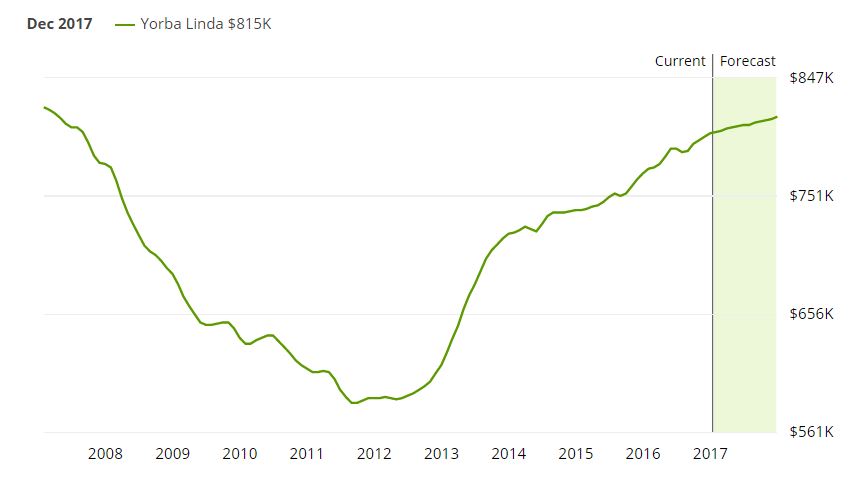 Climate: Yorba Linda is located in northeastern Orange County and typically has a semi-arid climate. The inland location leads to larger temperature fluctuation that coastal cities. The warmest month of the year is August with an average high of 90. The coldest month of the year is December with an average low of 47. Yorba Linda receives 14 to 15 inches of rain per year on average.

Crime: Yorba Linda is one of the safest cities in the country, 84% lower than the national average and safer than approximately 96% of the cities in California. Safety has become a matter of discussion in the city, however, as the number of crimes has increased by 9% from the previous year.